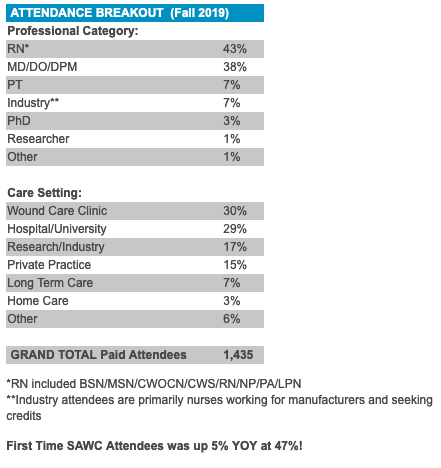 The Symposium on Advanced Wound Care (SAWC) is the largest gathering of multidisciplinary wound care clinicians in the United States. Continuing education credits are offered for physicians, nurses, pharmacists, podiatrists, physical therapists, and dietitians. SAWC Fall was launched in order to enhance attendee accessibility to the premier education event of SAWC through the strategic location of two events in opposite regions of the country.

What are the Benefits of Exhibiting at SAWC Fall?

The scope of SAWC continues to expand with SAWC Fall. As an exhibitor, you can expect the same caliber and multidisciplinary attendee mix as you see with SAWC Spring/WHS. Similar to SAWC Spring/WHS, SAWC Fall includes unopposed Exhibit Hall hours. Exhibitors have come to expect and appreciate having the complete focus of meeting attendees during exhibit times.

As the second largest wound care conference in the U.S. to SAWC Spring/WHS, we are expecting more than 1,000 attendees and between 80 and 100 exhibiting companies this year in Las Vegas.

We Support Our Exhibitors By Providing:

HMP Education reaches more than 225,000 wound care professionals and decision-makers through an aggressive marketing campaign that utilizes an array of print and web vehicles, outlined below.